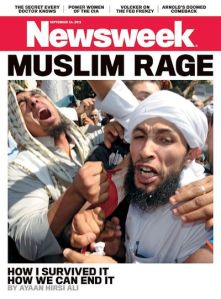 Salman Rushdie is still deplored east of Istanbul: looking at his twitter stream, it is obvious he finds it difficult to restrain his contempt for the illiterate death threats and abuse he still receives for his alleged, but absent blasphemy in The Satanic Verses.

I say ‘absent’, because, ten years ago, when England still had laws against blasphemy, 13 Muslim barristers brought a case against him in an English court. They manifestly were able, despite close textual references, to demonstrate blasphemy. The case resulted in the UK Home Office removing blasphemy laws from the statute books, and they threw the case out of court.

The death threats continue, however, and today the Muslim world is on the verge of the explosion, if today’s online edition of dawn.com is anything to go by: this is ‘Love For the Prophet Day’ in Pakistan, which has seen mobile phone networks suspended, diplomatic areas sealed off and police using tear gas and live rounds of ammunition to control crowds. Protests have turned violent, with arson and ransacking of shops and homes. Not an entirely unforeseeable chain of events, particularly in the light of some silly ‘film’ that has been circulating on YouTube.

Earlier today, a friend from many years ago in Egypt posted this articulate and passionate response to a state of affairs, described by Newsweek and trending on Twitter as #Muslim Rage, in which violence breaks out in relation to a choreographed response to a crude and gratuitous chain of insults to Islam. He argues that Gulf states are promoting their own subversive agendas and using their petrodollars to create from Islam a narcissistic image of itself, self-fixated and grandiose, but devoid of humanity and spirituality.

By way of an answer, some opposing points need to be advocated. European countries and other Western countries do frequently speak of the idea of ‘freedom of speech’. They also hold some outrages of their own: why do Sunni Muslims systematically oppress, brutally, the existence of non-Muslim (or even Shia and Ahmadiyya Muslims in the case of Pakistan?) How can the Danish cartoons, really, be more offensive to human sensibility than the genocide of millions of Muslims in Darfur, an event that was met with near silence in the Muslim world?

Consider, for instance, the dreadful behaviour and long-standing animosity held towards the Copts in Egypt (the same experienced by the maker of the troublesome ‘film’ that is currently causing so much trouble), documented here.

Or how about the awful case of a Muslim who himself burned pages of the Quran in order to frame, and thus to have executed, an illiterate 14 year-old girl with Down’s syndrome under the infamous Blasphemy Law?

The problem lies in the idea of what blasphemy itself is – the holding of an idea as sacred, or untouchable. Untouchable, or sacred, ideas are a curious anomaly in a world which is now a marketplace – a marketplace of ideas which compete with each other. To hold one sacred, and thus to declare it beyond critical discussion, is to steal the argument by unfair means.

Ideas, be they theories of literature or of economics or anything else, are to be contemplated on their own merit. One hypothesis will, by means of debate and rational discourse, outpace and outwin another; this is normal, it is through the process of debate that we can determine the truth, and progress from ignorance to enlightenment.

No human society can develop and progress without truthfulness. When an idea is shown to be false, it is to be discarded. Mythologies, superstitions and other traditions may provide the vulnerable with a sense of identity and self, of home and belonging (see my previous entry on home and identity) but they do not enable us to embrace the challenges of the present. We gave up on believing the world was flat because, quite simply, it made no sense to ignore the evidence yielded up by intelligent discussion and enquiry.

But in under-developed places like Pakistan, when these ideas come anywhere close to being truthful or progressive – they are censored, blocked, cut off, removed from the internet, and their perpetrators and proxies burned, imprisoned or killed.

And what is now demanded by religionists in these under-developed lands, and their liberal allies in developed ones, is a fearful obeisance to mythological constructs: religion should be given a special place, a velvety cushion of hushed protection.

The Organization of Islamic Conference at the UN now seeks to make it illegal, anywhere, to blaspheme Islam. In their view, it should not be discussed, nor debated, nor contextualised except in ways that have been authorised or approved of by their majority, Sunni view – ignoring the narratives that include Shias, Ahmaddiyas, Christians or Jews.

The issue at stake here might best be illustrated like this: before entering a mosque, I would – and should – take off my shoes to indicate a civil-minded respect and courteousness to the believers inside.

But if a believer expects me to respect his religious taboos after I have left his place of worship, he is not asking for more than my respect – he is asking for my submission. And that simply will not do.