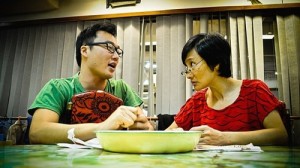 The question of land, urban development, property and who is allowed to live on it, is an unsentimental representation of the emotionless, invisible hand of the market in the face of the common desire to put down roots and create our own history.  Sadly, land (just like everything else) is a highly monetized commodity, and any attempt to use it to root ourselves to the past, or the future, or to create an identity based on either of them, is inevitably doomed to tragic failure.

This gloomy but rather truthful view of life is passionately evident in Sight Lines production of “Boom! by Jean Tay” currently running at DBS Arts Centre. It centres around a family being forced to move from their home from their HDB flat because of en-bloc development in the face of the continuous onslaught and march of progress: the powerful and passionate Madam Ong (Fanny Kee), and her son Boon (Andrew Lua) – a budding property agent in the making who spends his days trying to sell unattainable dreams to other people. Their story is bound together by a compassionate but unlikely civil servant working for the heartless and fictitious Ministry of Land, who is apparently implementing this rule currently in force within Singapore cemeteries:

With effect from 1 November 1998 , the burial period for all graves will be limited to 15 years. At the end of the 15 years, the graves will be exhumed. For those whose religion permits cremation, the exhumed remains will be cremated and stored in columbaria niches. Where compulsory burial is required due to religious reasons, the remains will be re-buried in smaller individual plots. (http://www.nea.gov.sg/passesaway/burial.htm)

The conflict of the play essentially revolves around the mother’s unwillingness to give up her home, an idea that is conflated with personal identity: her home is her past, and also her future (“this is my home and I want to die here”).

So much in this beautifully conceived story is allegorical. In a resource-based economy, not even death is forever – and the dead must be disposed of after a sufficient period of time has passed in order to make way for more dead bodies: “Who is more important, the living or the dead? Who pays taxes?”

Two contrasting opposites seem to reflect each other here. On one hand, Madam Ong treasures a living-room full of tattered knick-knacks, gaudy $2-shop-chinoiserie, the same as to be found in any senior citizen’s home. She cherishes these and guards them as closely as her own history. Is there anyone really who does not horde and gather objects and ‘stuff’ for sentiment’s sake, defending our bric-a-brac as our own private, personal relics in attics and cupboards? Stockpiling our ‘stuff’, it seems, is the last bastion of Self against the impersonal tide of devastating change, whether it is constantly increasing rent and frequent moving of apartments or the tearing down of one building to make room for a new smaller, shinier block of flats with a swimming pool on top.

In contrast to Madam Ong’s sentimental keepsakes is the trope of the property agent and all this repulsive category represents, pushing forward the endless march of land development. These individuals seems to be a particularly Singaporean phenomenon: a whole army of experts selling ‘spectacular new projects’ and unattainable dreams of luxury on commission to those who desperately need an outward display of their own perceived worth. (Nowadays, the ‘unattainable dream’ seems to comprise roughly 500 square feet for $3,000 a month and a living room so small you have to choose between either a sofa or a coffee table, because in the living rooms of many so-called ‘shoebox’ apartments, you won’t be able to fit both. This micro-sizing is so becoming so prevalent that the CEO of CapitaLand recently described it as ‘inhuman’.)

So here you have the future then, a variation on Orwell’s ‘boot stamping on the human face forever’: smaller and smaller apartments, higher and higher rents, homes being stripped away and with them all associated history, to be paved over with a pre-fabricated narrative of the past told through heritage spots and museums where people used to live, now converted into zones which they can merely occupy for a limited period of time.