#JeSuisCharlie is a turning point in world affairs and in European identity politics specifically. What is decided now, moving forward, in the great marketplace of ideas, will determine the cultural landscape and fate of France, and Europe, for a very long time.

Offense over blasphemy is not a new problem: we have been here before, of course, and it started in 2005 with the Danish cartoons published in Jyllands-Posten. During the course of this incident, which saw the quiet publication of cartoons being deliberately exported abroad by Danish imams in order to cause a violent reaction, the first assertive attempt at bringing the question of blasphemy to the Western mind was made. It was, a troublesome and violent taste of what is to come as Islamic values increasingly stand up to European ones.

Charlie Hebdo, an inconsequential magazine that almost no-one outside France had heard of, and whose editors and journalists had been attacked in 2011, lived with acceptance under the threat of death and the editor famously said he would rather die than live on his knees. And die he did. In the days which followed, Europe was left to affirm or renegotiate its own values and beliefs, a process that is only just now beginning.

Voltaire’s attributed remarks on defending ‘to the death’ your right to say something even if he didn’t like it were repeated over and over – even though this famous line was not written by Voltaire but by one of his biographers. Yet, regardless of the authorship of this quote, a social consensus on speaking your mind and poking irreverent fun has grown and flourished from the secular dogma known as laïcité in France.

Laïcité is a concept established in the 1905 Separation of Church and State, to prevent theocratic exceptionalism for the Catholic church, or for any other religious body in the public square. The right of free worship and belief is upheld, but by the same legal invention which also provides for freedom of thought and speech. The public square is therefore a vacuum, in which no dominant idea or practice can destroy another or hold a position of power over another. By preventing degeneration into partisan theocracy, and through the provision of a humanistic guarantee of freedom from religion for all, the French government is legally prohibited from the establishment of, or privileging of, any religious worldview in France. It is this law which prohibits the display of religious symbols in public. The controversial banning of full-face coverings originates in this law.

The counterpoint to free speech in France, of course, is the freedom to disagree, the freedom to produce even more free speech: to protest, to cancel magazine subscriptions, to complain to the Editor, to create dissenting Facebook groups, to even to call for a national strike in solidarity of your cause. The French ‘manifestation’ is such a daily occurrence that it is seen as a national obligation, than a right. It is a serious misunderstanding therefore to take, as many are currently trying to do, a position which says Well, we cannot possibly condone killing, but – you can see where the terrorists were coming from and why they were upset.

This liberal penchant for self-adjustment and self-censorship has been seen already in various news organisations. ‘I am Charlie’ became ‘We are not all Charlie’ in a matter of a few days: who is daring enough to reprint the cartoons without a pixelated blur over the offending drawings? The BBC moved to clarify that it had no ban, per se, on the depiction of the prophet of Islam, but that it was left to individual judgment.

Is this cowardice? Does this create the conditions for the pernicious culture of self-censorship? What sane editor would risk his life on it, now or at any time in the future? The answer is, surely, yes. Yet, the question of blasphemy is, as with so many Islamic questions, not clearly answered. It is disputed and contradictions exist within the Islamic tradition. Depictions of the Prophet Mohammed exist in the art of Iran, Turkey and other areas, such as in this piece of artwork from the Topkapi Palace dating from the 13th century: 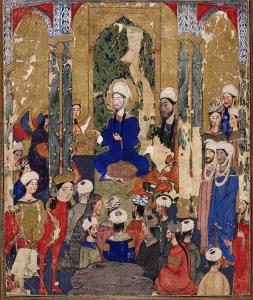 Given the lack of absolutes, to claim therefore that offense must not be taken, nor given, is to make the taking of offense at once dynamic and strategic. Offense becomes a beam in the eye of the beholder: I am offended because is the parent of I will be offended if you do/say/think such a thing, and you therefore will kindly desist. It creates a place of privilege from which to gain unfair advantage over another. It is also endow to religious ideas with the rights reserved for humans, as though religious and cultural practice is subject to special legal protection. If such ideas can be protected through strategic violence, why not allow special dispensation for vegetarianism, schools of economic theory, political party affiliation? But in the end, all these questions are reduced to a single overwhelming one of the ownership of public space in a secular democracy.

An opinion in the Huffington Post claims “I wouldn’t wear a bikini in Church, even if it is my right, why would I wish to offend others because of their faith?” (Perhaps the writer of this article had not been aware that protesters in the US have indeed done such a thing.) Such an unreasonable analogy serves only to obscure the fact that, indeed, one might not wear provocative clothes within a church, or mosque, but the limits of religious observation in a secular society are located at the doors of the church or mosque: the High Street is not sacred and religious norms do not apply to it. They may apply in Riyadh or Islamabad, but to bring this definition of offense to bear on everyone living in Paris or New York, regardless of their own conception of it, is to act with extraordinary gall and daring; to go further and advocate it, or apologise for it, is surely to demean and diminish the very platform from which you write.